Klamath Falls – The Link To The State Of Oregon

Originally called Linkville when it was founded by George Nurse in 1867, Klamath Falls can be considered to be the “link” to the state of Oregon not just because of the Link River but also because you have to pass through Klamath Falls if you’re heading to Central or Eastern Oregon.

An Area Rich In History

Like many other parts of Oregon, the Klamath Falls area has had human life there dating back at least 4,000 years as the area was a popular settlement for Native Americans long before George Link came to the area.

Today, Klamath Falls still retains the small town charm that people have known and loved about it over the years while still being close to the big cities and infrastructure that Oregonians have widely enjoyed since town leaders officially changed the name from Linkville to Klamath falls in the 1890’s.

Things To Do In Klamath Falls

The city of Klamath Falls, Oregon, is in the high desert just east of the Southern Cascade Mountains. Much of the local economy revolves around forestry and agriculture. In contrast to all this cultivated land, the Klamath Falls region is also home to major wildlife preserves and national forests, making it a hotspot for nature lovers. Visitors to Klamath Falls will find the beauty and diversity of the local landscape the major attraction, which you can experience via outdoor recreation or on a scenic drive.

Some of the most popular things to do in the Klamath falls area include: 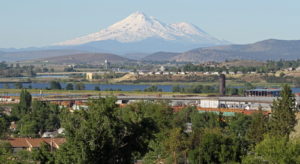 Did you know that Klamath Falls gets about 300 days of sunshine per year? That’s right! To learn more about Klamath Falls visit https://traveloregon.com/places-to-go/cities/klamath-falls/ or visit the city of Klamath falls website by clicking here.

What’s your favorite thing to do in the Klamath Falls area? Leave us a comment below or share a picture with us on our Facebook page by clicking here.

2018-10-11
Previous Post: Brookings – Oregon’s Banana Belt
Next Post: Beaverton – Learn more about one of the most popular cities in Oregon