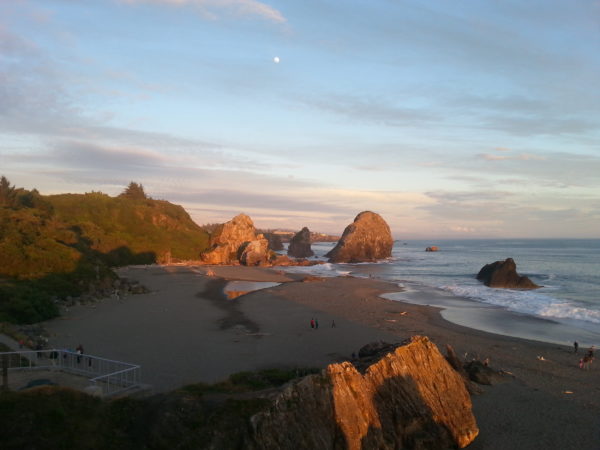 Thanks to scientific data, we know that human life, most likely Native Americans, existed in the Brookings area as far back as 12,000 years ago and it’s easy to see why because the area doesn’t get much extreme weather like other parts of Oregon do during the winter and summer months.

Although the town originally started out as a logging town, Brookings has quietly developed into one of the Oregon Coast’s most loved towns over the years because there’s a half dozen beautiful beaches within minutes of each other and a warm small-town vibe that you can’t find anywhere else.

The quiet town of Brookings was briefly involved in WW2 when a Japanese bombed flew near Mount Emily with incendiary bombs hoping to create massive forest fires. The attacks only left the area with minor damages and the town of Brookings actually invited the fighter pilot back in the 1990’s in a gesture of friendship between the USA and Japan.

Since WW2, Brookings Oregon has primarily developed into a resort style community where senior citizens come to play or pass through in their RV’s as they head up the coast for the weekend.

You can also find a fair share of commercial and sport fishermen who call the area home as well as owners of commercial tour boats who take their guests out on weekends for whale watching and fun.

The total population of the Brookings area is over 13,000, which includes Harbor (a census-designated place), and others. There have been numerous proposals to annex the nearby unincorporated areas into Brookings; while most attempts failed over the years, one large area north of town owned by the U.S. Borax Corp. has succeeded. This development has the potential to add approximately 1,000 homes over the next 20 years, although developers expect many of them to be occupied only seasonally. The unincorporated community to the south of the Chetco River, while included in the Brookings Urban Growth Boundary, has resisted annexation into the City of Brookings. There development has occurred without annexation, as Harbor is independently served by independent fire, water and sewer districts. The City of Brookings offers the only 24/7 police service in Curry County.

Besides the close proximity to wonderful beaches and other local attractions, Brookings is a few hours away from other destinations in California and Oregon like Crescent City California, Newport the Oregon dunes and so much more!

To learn more about Brookings OR visit the City of Brookings website at https://www.brookings.or.us

2018-10-03
Previous Post: La Grande Oregon – The Hub of Northeast Oregon
Next Post: Klamath Falls – The Link To The State Of Oregon