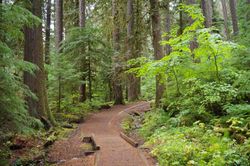 Are you planing on visiting one of Oregon’s state parks in the coming weeks? If so, the good news is that they are starting to reopen following Coronavirus.

Oregonians are not used to sitting idle so with our parks reopening it’s likely that people who have been stuck at home since March will be ready to get out and start hitting the hiking and biking trails once again.

The biggest change at Tryon Creek was found at the restroom. The park usually keeps three restrooms open, but Wednesday only one was open to the public. Paths to the restroom were marked as one-way and led to a waiting area, where a sign told visitors to maintain social distance.

While crowds were sparse Wednesday morning, Havel said more people showed up in the afternoon. Even more are expected once the weather warms up this week. Temperatures are expected to reach the mid-80s Friday, lasting through the weekend.

Unlike most state park sites, Tryon Creek is accessed by a number of neighborhood trailheads including bike paths that lead to the nearby Lewis and Clark Law School. That can make the park more crowded than its parking lot suggests.

“We’re looking at the result of day one to see if there are changes we should make to operations or signs to encourage more people to spread out, postpone their trip when they see the lot is nearly full, and stick to their own household group,” Havel said.

Some Campgrounds Reopening By June 9th

Camping will be back open at some Oregon state park sites, just in time for summer.

Some state park campgrounds will reopen June 9, the Oregon Parks and Recreation Department announced Thursday, though there will be limited services available for the tent and RV campers who stay the night.

A list of campgrounds that will reopen June 9 is still being finalized, and will be released by the end of May, the parks department said.

2020-05-14
Previous Post: Executive order will allow Mount Hood ski resorts to reopen. Will they?
Next Post: Where Are The Best Places To Go Camping In Oregon? Part 1