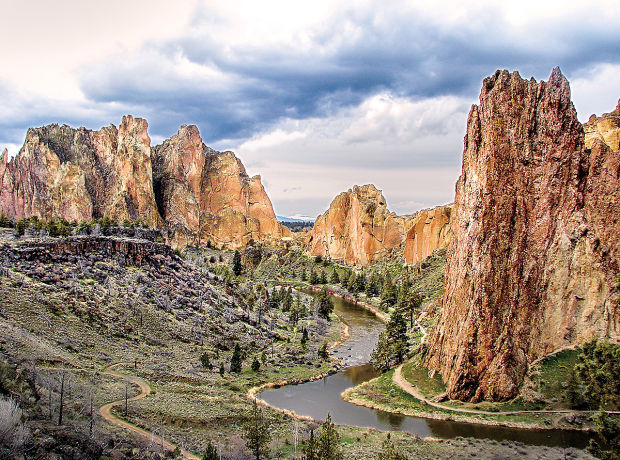 The weekend is almost here once again, if you’re searching for places to visit in Oregon that you may have never traveled to before you should consider traveling to Smith Rock State Park in Central Oregon.

Located just outside of Redmond Oregon, Smith Rock is a beautiful state park that offers you deep river canyons, rock climbing and endless trails that you can either hike or bike on throughout the year.

Named after John Smith, in Oregon sheriff and legislator in the 1850s and 1860s, Smith Rock is better known as being the birthplace of Adventure climbing in the United States.

The park contains the first U.S. climb rated 5.14 (8b+). The area is well known for its challenging climbing routes and attracts high-level climbers. In 1983, Alan Watts began to use sport climbing ethics which pushed American climbing to new levels. Shortly after, between 1992 and 2009, about 500 new climbing routes were added. This brought climbers from all over the world as Smith Rock became the world capital for sport climbing. To this day, the park still attracts climbers from around the globe. The winter weather is typically cold (below freezing), but climbers still make the journey due to the reduced traffic on routes. Summer months regularly reach the 100s °F (40s °C). Some climbing routes are closed periodically for the protection of nesting birds of prey.

Smith Rock State Park has more than 1,800 rock climbing routes as of 2010. The park is broken up into walls and has names commonly used by the climbing community.

If You Go To Smith Rock

If you choose to spend the day, or weekend, at Smith Rock State Park, make sure that you come prepared.

Let’s say that you don’t plan on camping at Smith Rock Oregon, no problem! There are a wide variety of motels and hotels in nearby Redmond, Prineville, or sisters, which make the area of a very convenient place to stay and play without leaving the comforts of home!

Located just 3 miles east of highway 97 from the tiny town of Terrebonne, there’s a big brown state directional sign on the east side of the highway by the yellow highway light. If you drive completely by a cluster of a few restaurants and a gas station you’ve gone too far. For maps and GPS coordinates click here!

Smith Rock is a great place to visit all year long! Get out and enjoy the area and see why it’s another example of why Oregon is Beautiful!